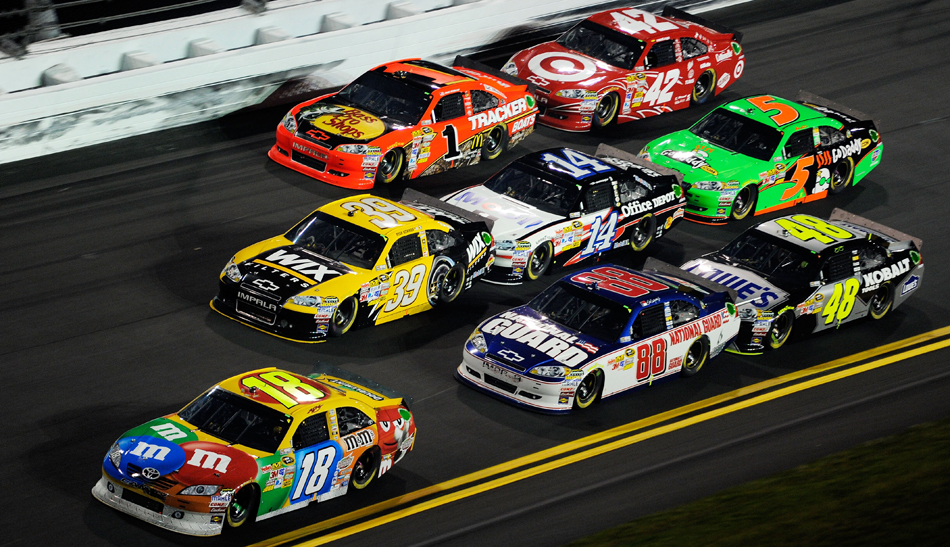 A few years ago, I lived in Southeastern Georgia and Northern Florida – ground zero for NASCAR fans.

I also worked on construction sites where 90% of my employees touted their favorite drivers with bumper stickers on their trucks or various types of apparel.

Living in this environment made it crucial for me to keep up-to-date on the sport. More importantly, I had to select a driver to root for.

I carefully studied the NASCAR roster to find someone who appealed to me. What I discovered was a disappointing lack of diversity.

I eventually chose to root for Jeff Gordon because he was my age and seemed to have a bright career ahead of him.

It’s been nearly two decades since then and NASCAR still has a diversity problem.

Last fall I attended the race with my son at Texas Motor Speedway (BTW – Jeff Gordon would have won that race if not for Brad Keselowski’s dirty driving).

A woman sitting next to me struck up a conversation about the sport. I told her about my experiences with NASCAR and how I was trying to introduce my son to the sport because we both love cars and racing.

Without prompting she remarked, “Too bad there aren’t more drivers who look like your son. I hope NASCAR does something about that.”

Over the past few years, NASCAR has taken steps to add more multicultural drivers and pit crew members to its roster through its Drive for Diversity (D4D) program.

“Taking steps to find and develop young multicultural athletes who could represent the future of NASCAR is at the core of our organization’s mission,” said Jim Cassidy, NASCAR senior vice president of racing operations. “We were impressed by the talent displayed at the Combine [in October of 2014], and are eager to help this group develop their strengths on and off the track.”

“NASCAR Drive for Diversity goes much deeper than putting drivers behind the wheel of race cars,” said Siegel. “The program is all-encompassing, providing competition, athletic training and professional development opportunities for drivers who have the determination and talent to reach NASCAR’s top levels. We’ve seen this with Larson, Suarez, and Wallace Jr. and are excited about the potential of this talented group of drivers.”

Devon Amos was born in Albuquerque, NM and raised in Rio Rancho.

Amos gained an interest in racing at the age of nine while watching a show called ‘Nascar Racers.’ After seeing his first NASCAR race on TV, he was hooked.

At the age of eleven, Amos’ parents gave him the opportunity to race a quarter midget. With little funding, a career in racing was a long shot, but his parents pushed on.

At fourteen, Devon advanced to the 1/4 mile oval at Sandia Speedway, racing a 4-cylinder Volkswagen Beetle.

When he turned 18, Amos started racing on dirt tracks. The first season was a little rough, but he managed to earn the 2010 Rookie of the Year.

After winning 9 other races, including the Modified Midgets of New Mexico Championship, Amos was chosen as one of the drivers to compete for Rev Racing in the Drive for Diversity program as a driver in the INEX Legend Car Series.

Amos will make the jump to the NASCAR K&N Pro Series East after two full seasons in the NASCAR Whelen All-American Series.

Jay Beasley got his start in racing at age seven. It didn’t take long for him to begin challenging the neighborhood kids to races, which he inevitably won.

Beasley’s father helped pave the way toward formal competitions because he saw that his son had the passion and talent necessary to be a NASCAR star.

Beasley is a promising young driver who has accrued over a decade of experience in competitive racing and has a long list of honors that include:

Finishing 13th overall and sixth in a loaded Sunoco Rookie of the Year field in the NASCAR K&N Pro Series East last season, the 23-year-old from Las Vegas will return for a second season, aiming to best his rookie campaign.

Dylan Cole Smith began his racing career in a Kid Kart at the age of 4.

After 5 years of getting acclimated to driving as a sport, Dylan won the 2002 Track Championship in the Junior Sportsman 2 Division at Thunder Road Speedbowl in Barre, VT.

Not to be satisfied, in 2004, he won the Junior Sportsman Division 2 Track Championship again, as well as the Overall Junior Division Championship and Shoot-Out Championship, a separate series run at three different tracks: Thunder Road, Riverside Speedway (NH), and Canaan USA Raceway.

Two years later, he was winning his first ALNRS Championship and began to set his sights on Late Model racing.

In 2009, Dylan won Rookie of the Year honors in the Touring Late Model division at Thunder Road Speedbowl and participated in his first NASCAR Drive For Diversity Combine, earning a featured cameo on Changing Lanes, a reality-based TV show chronicling the selection of the first driver class at Rev Racing.

The 22-year-old from Randolph, Vermont earned a spot with Rev Racing in the NASCAR Whelen All-American Series after competing in his own Late Model last year.

I’m looking forward to seeing each of these talented drivers in the Winner’s Circle.