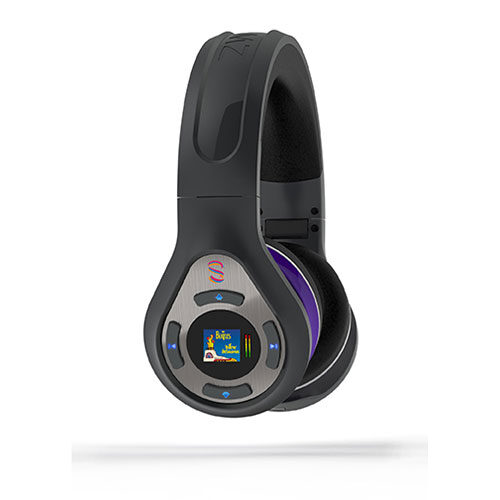 I’ve tried many headphones in my lifetime from the giant 1970s earmuffs to the 80s foam padded walkman headphones to the 90s earbuds, and finally the current high-end fashion accessory headphones produced by Beats, Monster, and Sol Republic. Each style was innovative in it’s own way, but none of them match the technological advances of STREAMZ, the world’s first smart headphones that include a built-in WiFi Android HD Music Player.

“When it comes to music people want the absolute best quality,” said STREAMZ CEO Douglas Kihm. “With Streamz you no longer need to bother with a separate player since it’s all built inside. Now you can easily and instantly enjoy all of your high quality music at anytime, anywhere without worrying about draining the battery of their phone.”

With its Bluetooth 4.0 wireless interface and an optional Streamz Bluetooth audio transmitter called TRANZ, you can also watch a movie, TV show or play a game with unparalleled sound.

STREAMZ is perfect for gaming, with audio so crystal clear and immersive that you will feel as if you were right into the middle of the action.

Streamz plans to offer several new software updates including a Voice Controlling module called “VOXXI” that will allow you to search and play music plus other system controls with Google voice commands.

“The launching of Streamz marks the advent of a new and exciting post-MP3 renaissance in music and hearables,” said Kihm. “True wireless, mobile HD quality music is now a reality. This is the beginning of a whole new way to enjoy music how it was meant to be heard; simple, pure and freely.”

Letter from the Editor: Show Love Beyond Valentine’s Day

The Obama Portraits to Go on a One-Year, Five-City Tour Starting in June 2021

Why I Wore a Dress to Motivate Employees

6 Ways You Can Prevent Post-Workout Acne

Letter from the Editor: 7 New Year’s Resolutions for Dads

Listening is a Powerful Leadership Tool

Mocha Man Style Exclusive Deal: Save 60% Off at Reebok

Letter from the Editor: Three Keys to Happiness This Holiday Season